As I mentioned in my previous post, my lovely stepsister, Erica, recently attended the world-famous Chelsea Flower Show in London. She is always jetting off to Paris for a shopping spree or going on Safari, so it’s fun to live vicariously through her. But because I am such a flower fan, I was particularly interested in her trip to the Chelsea Flower Show. Knowing this, she and my Master Gardener stepmother, Cathy, graciously agreed to share their gorgeous photos on my blog. I want to take this opportunity to express my gratitude to both Erica and Cathy. Through their pictures, they have made it possible for all of us to be armchair travelers to this spectacular event.

The Chelsea Flower Show has been going on in one form or other from the beginning of the 19th century to the present. It is the most famous and well-known horticultural event in the world. Initial versions of the flower show occurred during the 1820’s as an event for nurserymen and the head gardeners of grand British estates.  However, the first official Royal Horticulture Society Flower Show or the “Great Spring Show,” as it was called, took place in Kensington Garden in 1862. In 1913, the event was moved to the Royal Hospital grounds in Chelsea where it has been held every year since, except for a few times between World War I and II.

The centerpiece of the Chelsea Flower Show is the Great Pavilion. Inside the massive space ( almost 3 acres in size), some one hundred exhibitors from all over the world displayed an astonishing array of flowers and plants.

The Show Gardens are the largest and most prestigious installations, designed to showcase the best in garden design.

You wouldn’t believe it from the number of fabulous shots they got but, due to inclement weather and massive crowds, Erica and Cathy were limited in their ability to photograph all of the 10 show gardens, seven artisan gardens and eight “space to grow” gardens. Their advice to others like me who have the Chelsea Flower Show on their bucket list is to arrive early when the gates open at 8:00 am. It might even be worth it to purchase a Royal Horticulture Society membership so that you have access to their exclusive members-only days. Also, keep in mind that it’s England, so be prepared for rain and bring a rain poncho. If you would like to see the other designer gardens from this year’s show, you can check them out on the R.H.S. website. 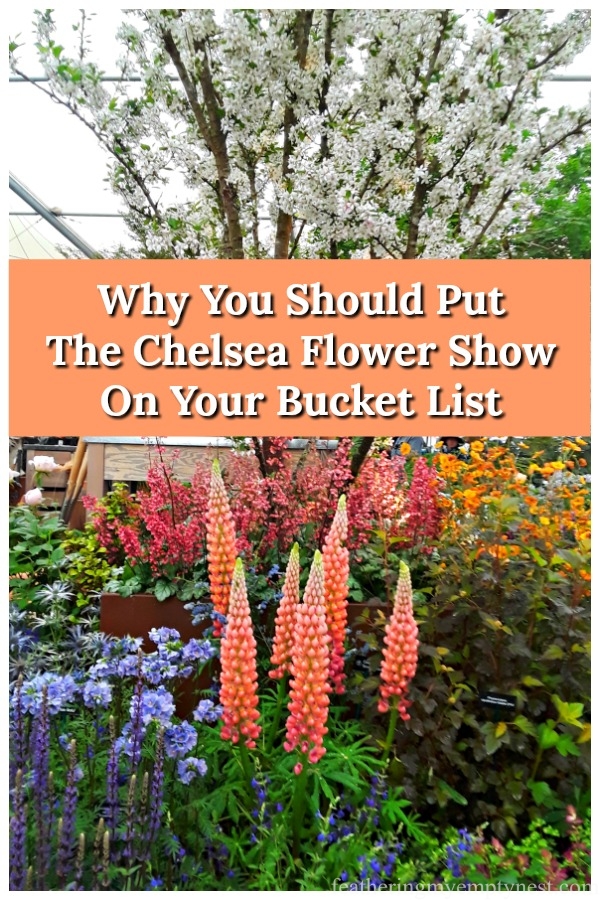