Earlier this year, I threw a Quilt Themed Party for my mother’s 80th birthday. So, when my father turned 80 in June, I wanted to celebrate him as well. My dad and stepmother had rented a large vacation home in the Chesapeake Bay area in Maryland for the last week of June and asked all their kids and grandchildren to join them. My sisters and I decided that this would be the perfect time to celebrate Dad’s birthday since most of our far-flung family were planning to be there.

I am a big fan of having a theme for a party because it makes it easier to coordinate all the elements from decorations, to the menu, to the cake. However, I had used a lot of the obvious party themes for my dad in previous years. Because my dad likes to golf, I made a huge golf ball cake for one of his birthdays.

Another year, I threw a movie-themed party for my film buff dad, complete with an outdoor showing of “Hopscotch” (one of his favorite Walter Matthau movies) and a cake that looked like a stack of film reels. I do not have a great picture of the Film Reel Cake because I made the cake in North Carolina and transported it 8 hours to Pittsburgh in a hot car. Needless to say, it did not travel well. The fondant kind of wilted, and we joked that it ended up looking like that Salvador Dali painting with the melted clocks.

Since I was fresh out of Dad-specific themes, I decided to jump on the current trendy succulent bandwagon. I reasoned that my dad would appreciate succulents because they are mostly green –his favorite color. And they have an architectural look that is a bit more masculine than flowers. Frankly, after seeing all the cool cakes on Pinterest, I was dying to try my hand at making some buttercream succulents of my own. Since many succulents are native to the Southwest, we decided to go Texmex with the menu and serve Enchiladas, a spicy corn dish, tortilla chips, Guacamole, and Margaritas. My sisters agreed to make the food, and I said I would make the cake and handle the decorations.

Because of the Film Cake fiasco, I was very concerned about how to transport the cake successfully. I researched and finally resolved to prepare the cake layers and the buttercream succulents in advance and freeze them. Then, I would frost and finish the cake on site. I knew that the cake layers would freeze fine, but I was worried about how the buttercream plants would fair. To make a succulent, you pipe it onto a parchment square affixed to a flower nail with a bit of frosting. Wilton has an excellent tutorial on making different kinds of succulents, but it is not a beginner project.

After I had made each plant, I placed the succulent topped parchment squares in a single layer in the bottom of a covered pie plate carrier and popped them in the freezer. They didn’t slide around in the carriers when I transported them because the dab of frosting that had adhered the parchment square to the flower nail also served to “glue” it in place in the pie carrier.

To further prepare for transport, I made 6 cups of base icing, tinted it gray, and put it into a Tupperware container. The different colored icing that I used to make the individual succulent varieties was already in the piping bags. So, I just covered the ends of the bags with plastic wrap and put all them all in another Tupperware container. I carefully placed all of this in a large cube cooler with lots of ice. In addition, I brought with me a variety of piping tips, frosting spatulas, a cardboard cake round, and my cake decorating turntable.

Much to my amazement, everything survived the trip unscathed. When I arrived at the vacation home, everything went in the freezer until the day of the party. On the morning of the party, I thawed the cake rounds, frosted the cake with the gray icing, and arranged the still frozen buttercream plants on top. I also piped some additional succulents onto the sides and top of the cake. 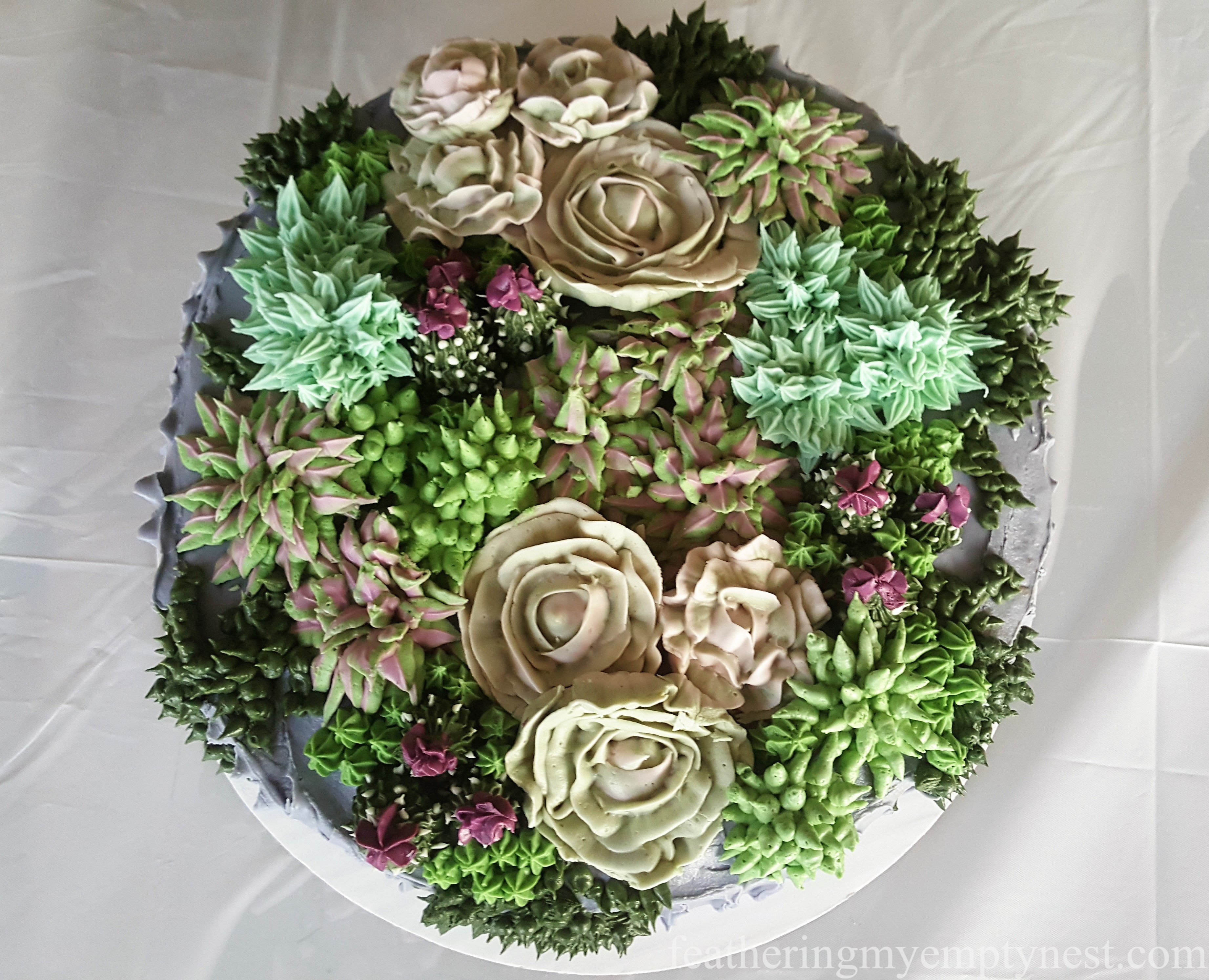 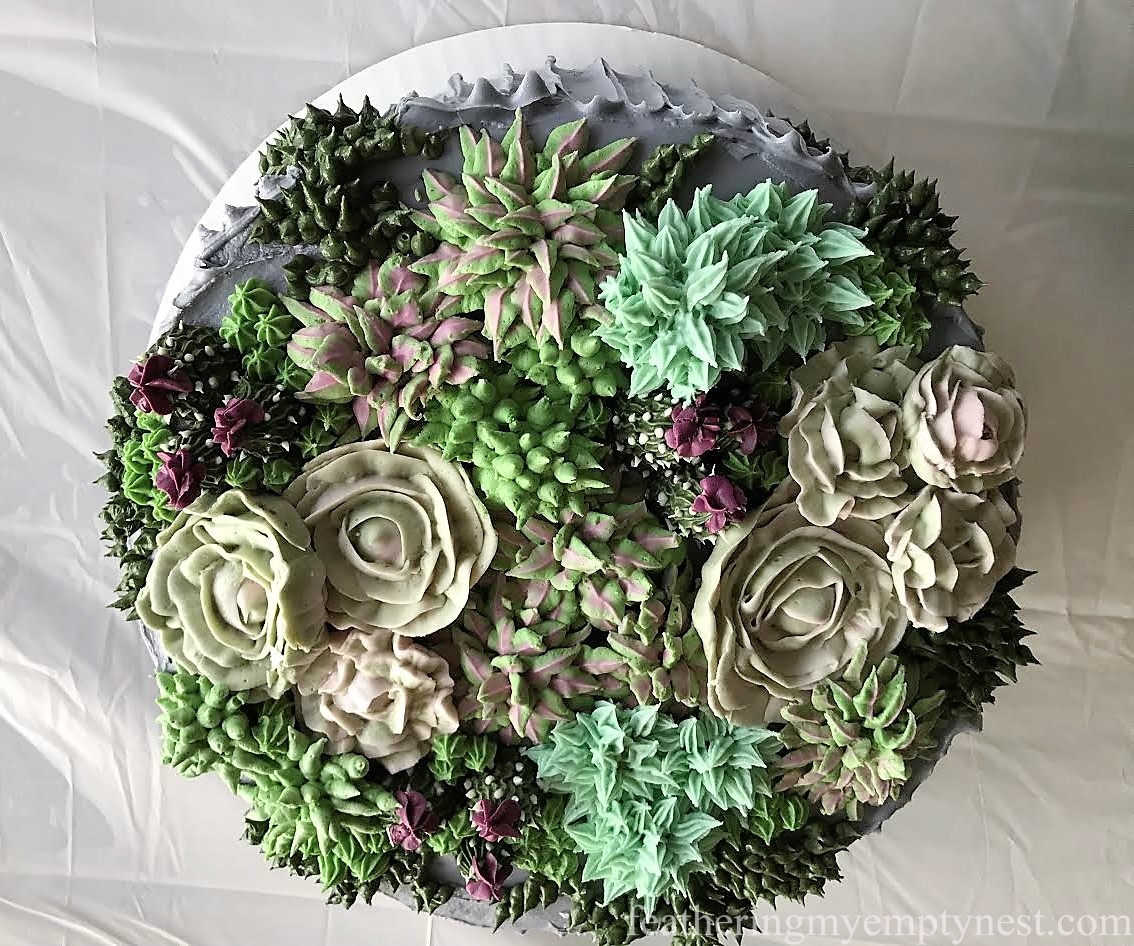 Other than the gray icing turning sort of a lavender color, I was pleased with how it turned out. It is a lot less nerve-racking to transport a deconstructed cake than it is to try to travel with a fully decorated one. Freezing the buttercream succulents worked so well that I will definitely freeze flowers in advance for future cakes, even if I don’t need to travel with them.

Since I had to schlep everything from home and didn’t know what the dining space would be like, my decorations were kind of minimal. We set the party up on the screened porch, which had one large table and two smaller wooden tables. This setup serendipitously provided the exact number of places to accommodate all the guests. 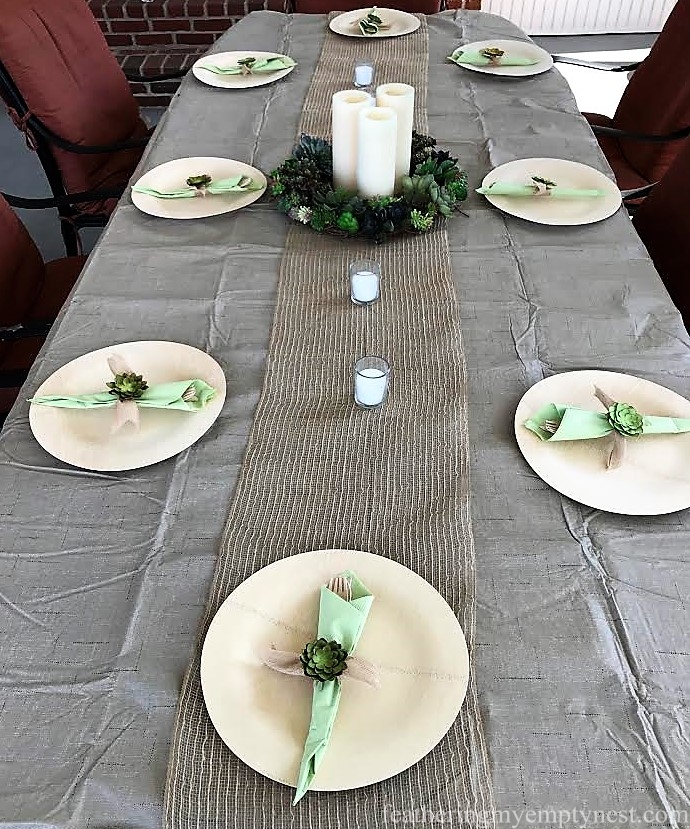 I used burlap runners to create texture and a natural tone for all the tables. The place settings consisted of disposable bamboo plates, cutlery, and leaf green paper napkins. I wrapped the cutlery in the napkins and tied it all together with burlap ribbons topped with 3D paper succulent stickers I purchased from Michaels.

I made a faux succulent wreath for the centerpiece on the large table and placed three large pillar candles in the center. It was just dumb luck that I had brought two rustic boxes with pots of faux succulents for each of the smaller tables. I also had a number of votive candles which I scattered around all of the tables. I wished that I had some balloons or garland to decorate the space further, but there was only so much my little car could hold. In the end, nobody felt the lack of additional decorations, as everyone just enjoyed being together to celebrate my dad’s special birthday. I know I feel very blessed to have been able to be there for my dad. 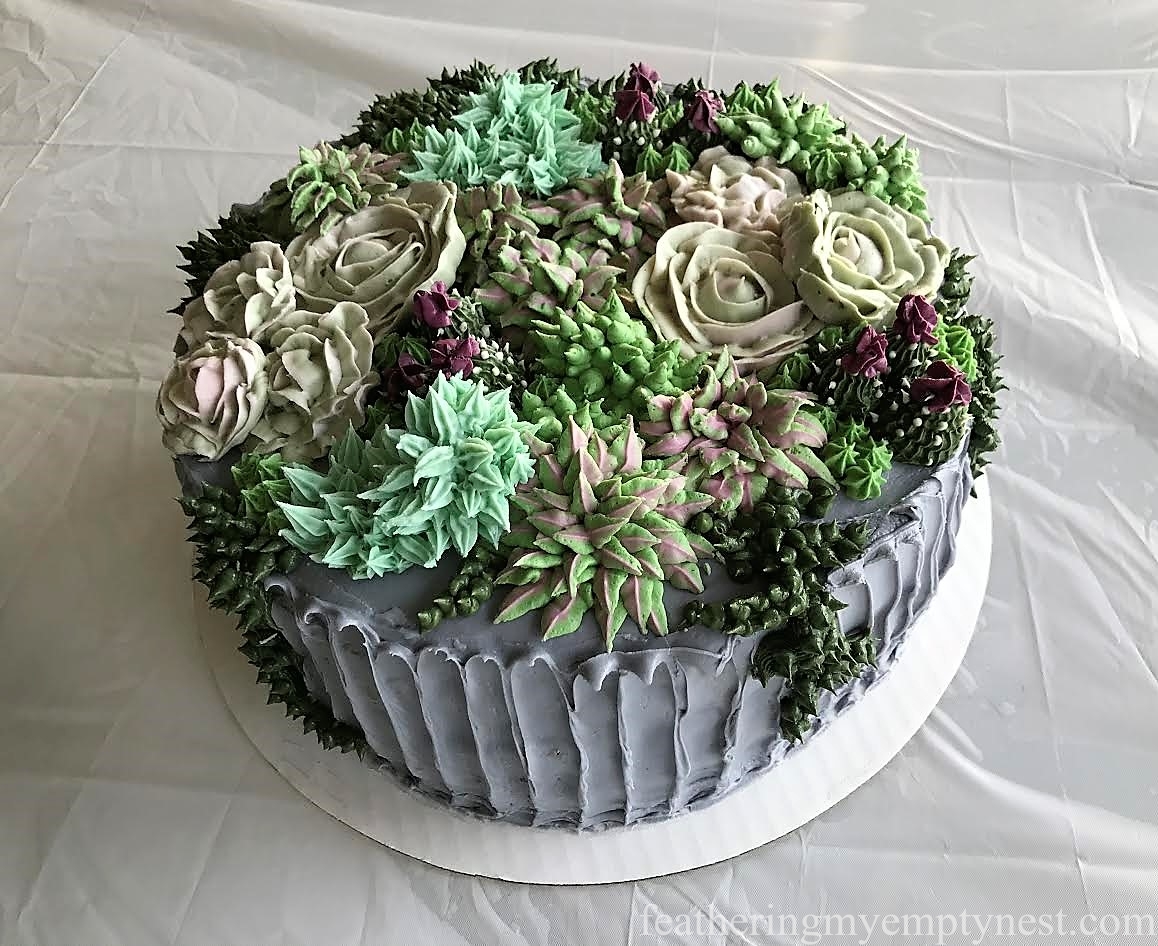 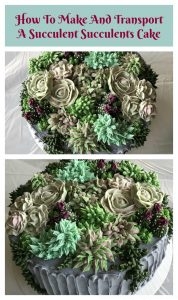