It’s Fall in America and apparently, that means it’s pumpkin time. I am not sure when this fruit with a gland condition (yes it’s a fruit, not a vegetable) became the symbol of all things autumnal. Maybe we should blame Charles Shultz. This time of year everyone seems to be channeling Linus, vibrating with anticipation for the arrival of “The Great Pumpkin.” Regardless of the impetus, the pumpkin’s exalted position as the most popular and ubiquitous harbinger of fall is indisputable. As soon as Labor Day comes and goes, people begin to wax rhapsodic about the joys of pumpkins spice lattes. Restaurants and bakeries rush to infuse pumpkin into everything from soups to doughnuts. And you only have to walk past a Bath and Body Works to know that pumpkin perfumed people will soon be popping up everywhere. If I admit to being perplexed and dare I say, a bit put off by this profusion of pumpkin, will I sound like the “Grinch Who Stole Autumn?” Don’t get me wrong; I’m not inciting protest. I will not be parading around town with “squash the squash” signs, but I do feel that a little pumpkin goes a long way.

While I’m not sure pumpkins have any business in my meatloaf, I do love the look of pumpkins, and I think they can be quite decorative. There is just something about their plucky portliness that is appealing. This arrangement in a shallow bowl on my coffee table is an example of the way I usually incorporate squash into my fall decor.

However, lately, I’ve been charmed by displays of stacked pumpkins. Piled on top of each other, these homely rotund fruits attain stature. To me, they are like colorful cairns carefully constructed as monuments to the harvest.

For many years, as soon as fall arrived, I replaced summer’s geraniums with mums in the planters outside my front door. Unfortunately, I never had great success with them. They looked beautiful for a week or so but once the first blooms died–not so much. It occurred to me that pumpkin towers could be an attractive alternative and perhaps, last longer than flowers. Ideally, I wanted something I could put out in September and not remove until I decorated for Christmas. I wasn’t sure this would work because I live in the South and September and October can be “hotter’n a goat’s butt in a pepper patch” (I’ve never actually heard anyone say this, but it wouldn’t be great if they did?) The only thing worse than dead flowers on your doorstep is rotting fruit! I suppose I could buy faux pumpkins, but as I’ve mentioned in previous posts, my bias is to use natural elements whenever possible.

After doing some research, I discovered a method to preserve pumpkins and gourds. The first step is to bathe them in a solution of 1 part bleach to 10 parts water. After they are thoroughly dried, rub them with Vaseline and buff with a dry cloth. I employed this technique last year, and it worked. Much to my surprise, the piles o’ pumpkins survived the entire season without rotting. My front door does have a covered porch, so they were not entirely exposed to the elements. However, if they are kept out of standing water, they should last through the fall. 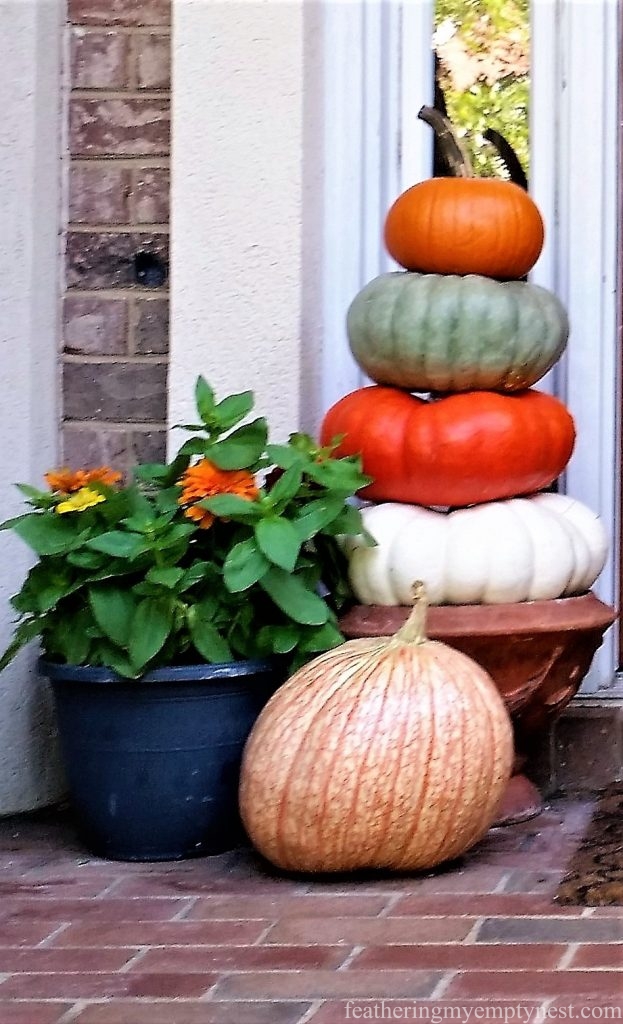 Nowadays you can find all kinds of interesting looking varieties of heirloom pumpkins. There are bumpy green ones called Green Goblins, white Ghost pumpkins, squat Cinderella pumpkins and many more. Be creative, vary the colors and sizes. Once you’ve made your selections, just trim the stems with a pair of garden shears. Cut them as short as you can without cutting into the rind, stack them up and get on board with the gourd!