If you haven’t read them before, check out Episodes One and Two of Floored–A “Gripping Saga of Hardship and Hardwood.

So much has happened since my last post about my flooring renovation that I don’t know where to begin. The fact that I am now referring to what occurred after we picked the stain color for our hardwood as “The Great Debacle,” should be your first clue that things did not go as planned.  I stopped by my house to pick up our mail the day the refinishers began applying the stain. By the time I arrived, they had already completed the second-floor hall, the master bedroom, and the stairs. When I saw the color we had chosen on the entire staircase, my heart sank. What had seemed perfect viewed in a one by two-foot sample, now seemed way too light, too yellow and rather flat. Yikes! I had no idea what to do.

I snapped some photos and frantically called my husband. God bless the man–I was a wreck, but he was cool as a cucumber. He calmly told me that we should call the project manager and have her stop the work. He pointed out that we couldn’t live with a color we didn’t like just to avoid the short term pain of having to start over again. While I agreed that it would be a bummer to have to live with a floor color we didn’t care for, I was loath to communicate this to our refinishing company. However, I put on my big girl panties and re-entered my house to ask the workers to stop staining for the moment.

Believe it or not, this is when things really went south. Unbeknownst to me, the guy in charge of the workers had some beef with the flooring company, and when he was asked to temporarily halt the work, he got angry and just told his workers to clean up and immediately leave the premises. It was a total disaster. I felt like I had tanked the whole project. After they abandoned ship, I tearily called the project manager to beg her to get them to come back. All she patronizingly had to say was that things had a way of working themselves out and she would get back to me at some point to let me know how we would proceed. When she finally contacted me much later by email, she let me know that they would not be able to resume work for two days.

Even more disturbing, when my husband and I returned to “the scene of the crime” that evening, we discovered that the workers had left all of the first-floor windows unlocked. And it appeared that when they opened one of the windows, it had come out of its track. It had actually fallen out of the frame and was lying on the dining room floor, leaving the front of the house open to the elements and would-be burglars. Needless to say, that after all this, I didn’t have a positive feeling about the outcome of our flooring remodel.

Nevertheless, I spent Thursday and Friday scouring the internet for pictures of floors I liked. But I approached Saturday morning, when we were supposed to take another stab at choosing a stain color, with a tremendous amount of trepidation. I knew I wanted to go a lot darker and also thought that maybe a more reddish brown shade would provide the warmth lacking in the Provincial stain as it appeared on my the floors.

Our flooring company informed us that they would not create custom colors, so we were stuck choosing from the standard options. I thought I might like Royal Mahogany, as it was the darkest of the red-toned hues. But when they rubbed it on the floor, it looked kind of purple. On my internet quest, I had read about a technique called water-popping in which they apply a mixture of water and denatured alcohol to the sanded floor before staining. This pops or raises the grain, allowing the wood to take the pigment better. Because the wood absorbs more stain, the resulting color is darker. We ultimately selected standard Mahogany, as it darkened substantially when water-popped. Wanting some sheen, I further made the decision to switch from a satin to a semi-gloss finish because I read that water-based polyurethane comes out duller than the oil-based, making the water-borne semi-gloss look more like the oil-based satin.

I was terrified to go back to the house after the second go at staining was completed, but given our security issues, we needed to check on the property. I am delighted to tell you that the second time was truly the charm. I love the way the floors came out. 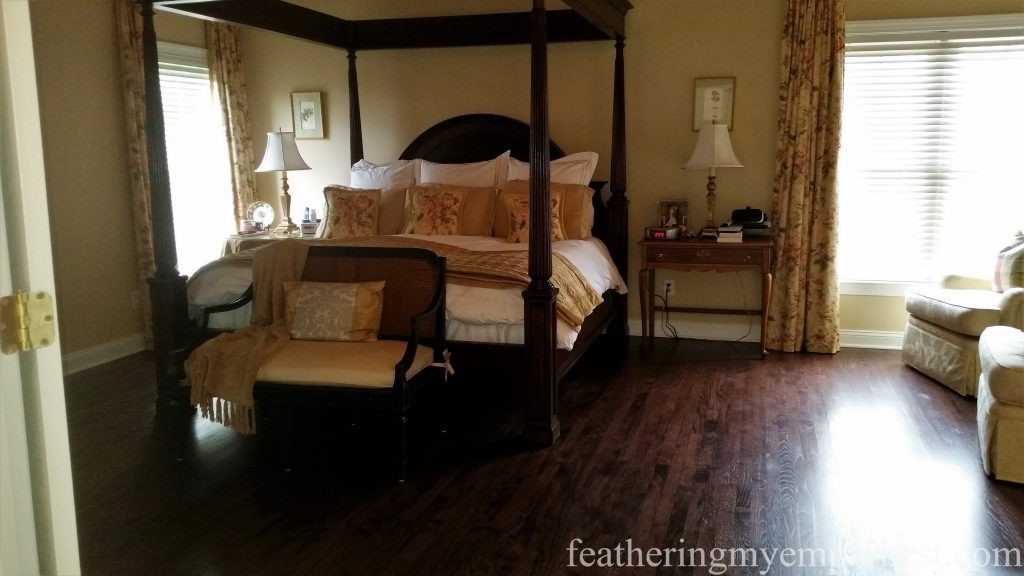 There are several morals to this cautionary tale. The first one is: don’t be swayed by popular opinion. I know that my first choice was influenced by the current trend in hardwood flooring toward medium neutral browns. I cannot tell you how many articles and pins I saw touting the advantages of this particular look. I definitely admired other people’s floors with this kind of finish, but the fact is, it didn’t look right to me with the lighting and color scheme in my home.

The second caveat is: do your own research. While I did look at many different flooring options, I allowed my contractor to provide guidance about color and finish. I didn’t know about water-popping or the difference between the sheen of water and oil-based polyurethane. If I had known more about refinishing going in, I might have made different initial choices. Also, when you narrow down the stain color to your two favorites, ask to see a large swath of it on the floor. It really helps to see a larger expanse of the sample stain over several boards.

Third: do ascertain up front if your flooring company subcontracts the refinishing. Dealing directly with the people who actually do the work would significantly reduce the opportunity for miscommunication, and there could be no passing the buck when problems arise.

Fourth: If you move out, check on the security of your property daily. Even though most of our rooms were vacant, all of our belongings were still in the house–all be it jammed into bathrooms, the kitchen, and the garage.

The fifth and last takeaway is: if something isn’t working, don’t be afraid to stop, make a change and start over. Despite the added time and expense, I know that I will never regret taking the time to make it right. It was totally worth it to have floors that I will be able to appreciate and enjoy for years to come.

Sharing this post at link parties hosted by these great blogs:

i should be mopping the floor

Dwellings–The Heart of Your Home