First, in my defense, just let me say that this whole thing began quite innocently with my simple desire to replace the dingy 20-year-old wall to wall carpeting that graces the entire second floor of my house. Little did I know that it would quickly snowball into a total mishegas.

It all started the last time I attempted to have my carpet professionally cleaned. I  made the mistake of complaining that, after spending hundreds of dollars on cleaning, my carpet still looked dirty, and then was carpet-shamed by the technician. He insinuated that if I had been more diligent about vacuuming, the cleaning would have been more successful. He went on to inform me that my carpet was suffering from a dreaded case of filtration soil and it’s prognosis was probably terminal. Having no earthly idea what he was talking about,  I turned to our modern-day oracle, Google, for answers. I soon learned more about this dirty little secret than I ever wanted to know. 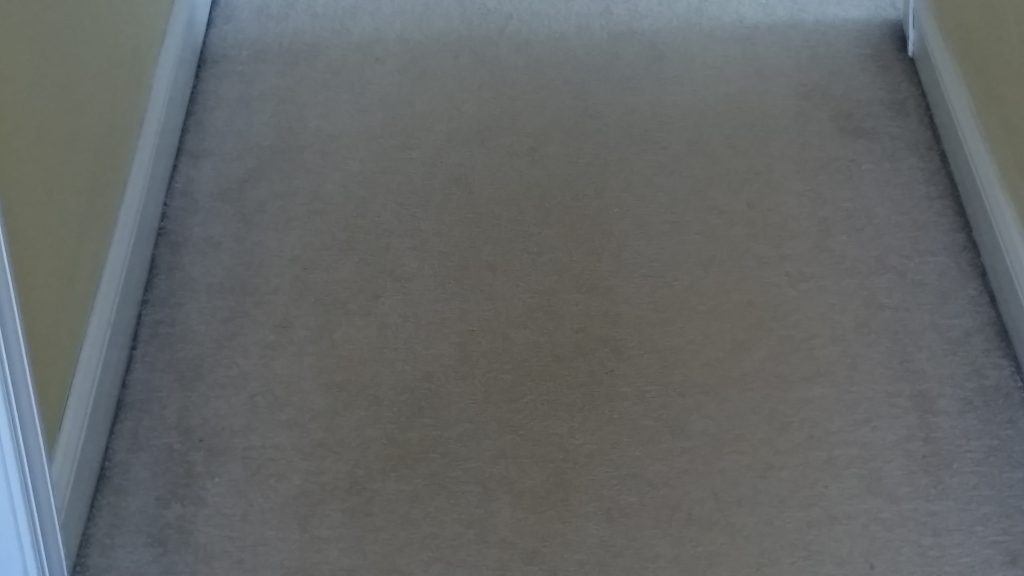 Apparently, these stains predominantly occur at the edges of carpeted areas. Essentially, filtration soil is dirt that is pushed up into the carpet fibers by forced air HVAC systems through gaps between the subfloor and the walls. It also can accumulate at seams in the subflooring across thresholds between rooms. 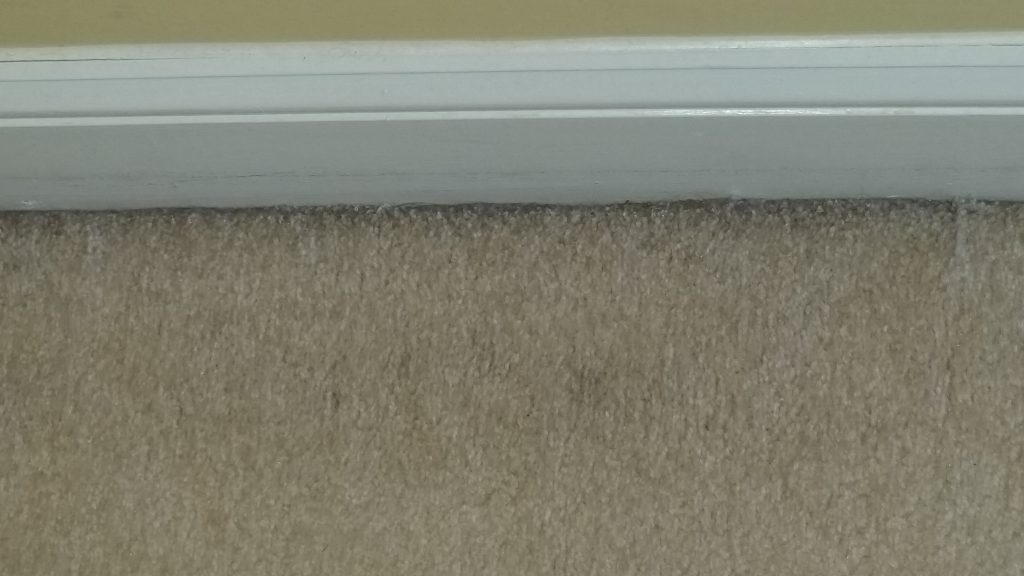 Delving further into this “fascinating” issue, I discovered that there are no really good fixes for this problem. I also learned that the snotty carpet cleaner’s criticism of my housekeeping skills aside, it is almost impossible to prevent this phenomenon in the long run. Some experts suggest that cleaning your ducts can diminish filtration soil. However, other experts warn that cleaning your ducts is unnecessary, risky, and can damage your HVAC system. Others recommend caulking all the seams in the subfloor but admit that this is difficult to do (not to mention impossible to find someone willing to do it.)

When I explained to my husband that our carpet was on life-support and not expected to recover, he blithely suggested that we replace the carpet with hardwood. While this would solve our filtration soil problem, I thought I’d prefer carpet under foot in the bedrooms. Despite my reservations, I was persuaded that installing hardwood flooring upstairs would be a good investment for resale.

At this point, I knew that the project was going to get out of hand. You see, I wanted the upstairs hardwood to match the hardwood we already had throughout the first floor. Unfortunately, we didn’t particularly like the color of the downstairs hardwood. The polyurethane had ambered over the years and had turned the wood an unappealing orange color. 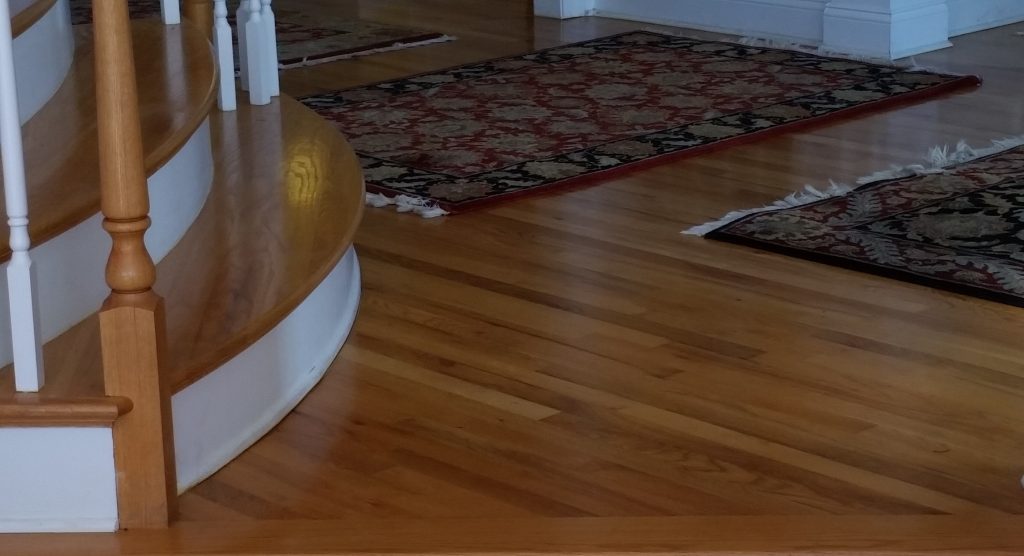 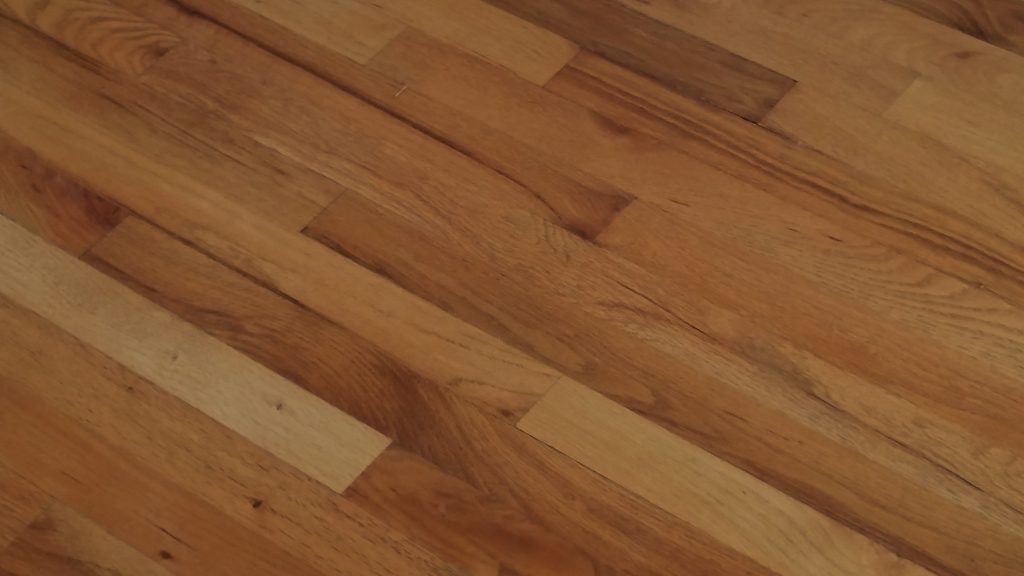 Also, our 85lbs. Labradoodle, Hampton had scratched the heck out of it when he was a puppy. So, the project expanded to include refinishing the floors downstairs. Then we realized that the banister and stair railings would also have to be refinished to match the floors. Yikes! 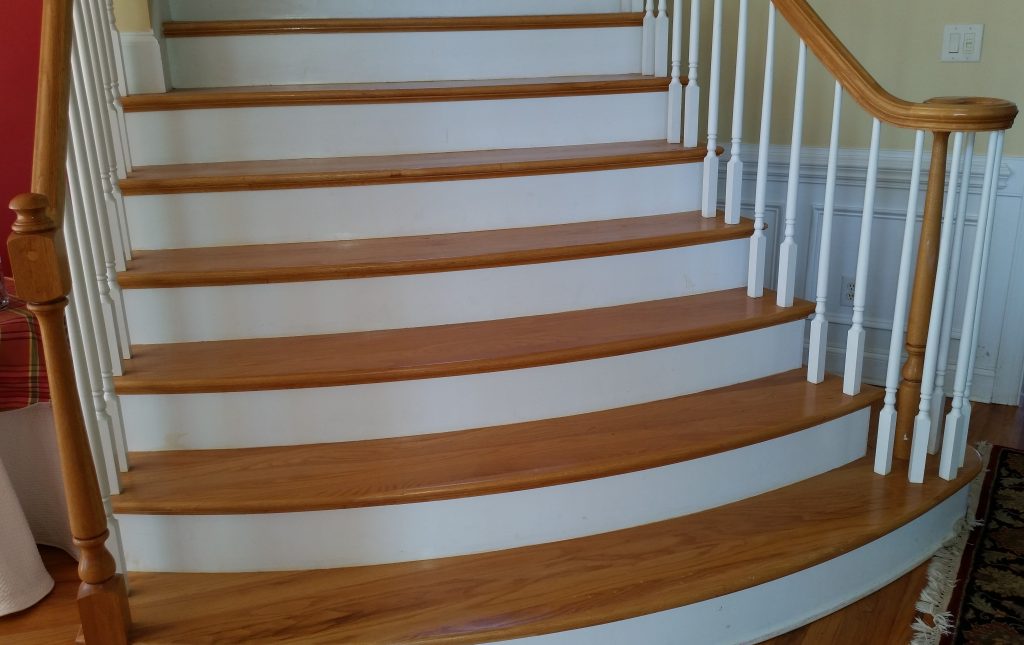 We were so naive because we actually thought that the price was going to be the biggest hurdle. I have since discovered that installing and refinishing hardwood floors is much like giving birth. Everyone focuses on the beautiful baby, but nobody tells you all the gory details of how the baby gets born. When we were considering this project, it never occurred to me that we would have to move ourselves, our dog, and all of our belongings out of the house for a minimum of ten days. My ignorance was such that I scheduled our flooring renovation a mere couple of weeks after Christmas. Now I am scrambling to take down my multitude of Christmas decorations and pack up 13 years of accumulated stuff by the start date of the project.

Stay tuned for the next exciting episode in which our hapless homeowners agonize over stain color and choose to add some carpeting back in a few of the rooms.