We just returned from our summer vacation at the fabulous Wild Dunes Resort on The Isle Of Palms in South Carolina. Our family has been going to the beach at Wild Dunes for the past 20 years. One of the myriad things we love about the resort is its proximity to Charleston and many other local attractions. Being avid history geeks, we have toured most of the historic homes in Charleston as well as several of the plantations located just outside the city. However, although we had eaten at the Middleton Place restaurant before, we had never toured the house museum or the gardens. So, one day when it was somewhat rainy and not a great beach day, we decided to spend the afternoon touring the house and exploring the enchanting gardens of Middleton Place.

Built on the banks of the Ashley River, Middleton Place was just one of 20 plantations owned by the Middleton family. The 7000-acre plantation came to rice planter and Continental Congress President, Henry Middleton in 1741 as part of his wife’s dowry. The plantation continued to be the home of generations of Middletons, including Henry’s son, Declaration Of Independence signer, Alexander Middleton, as well as Williams Middleton, who signed the Carolina Ordinance of Secession. The property was designated a National Historic Landmark in 1972.

The current Middleton Place House Museum was originally built by Henry Middleton as one of two identical buildings that flanked the central Main House. The grand 3-story main residence, which is no longer standing, was erected in the early 1700’s by Henry’s father-in-law, John Williams. Henry added the two flanking edifices in 1755. The North Flanker served as a library and conservatory, and the South Flanker was the plantation office and quarters for visiting gentlemen.

Union troops set fire to the plantation in 1865, burning the North Flanker and the Main House beyond repair. A tremendous earthquake in 1886 further reduced the two burned-out buildings to rubble. After the war, the family was able to restore the South Flanker as their residence on the property.

We took an informative guided tour of the museum house which contains many of the family’s treasures, including paintings, silver, jewelry, books, documents (Alexander Middleton’s personal copy of the Declaration Of Independence), and other furnishings which were buried or hidden away to save them from fire and looting during the Civil War. The docent did an excellent job of painting a picture of the Middleton’s rarified antebellum lifestyle, while also showing how all of their prosperity had been built on the backs of the more than 800 people they enslaved during the years before the end of the Civil war and emancipation.

As fascinating as the house museum was, I was primarily interested in the 65-acres of gardens which are said to be the oldest landscaped gardens in America. Henry Middleton began construction of the elaborate formal gardens in 1741.

The gardens were laid out using the style created by André Le Nôtre, the landscape architect of Versailles. This design style is characterized by the use of symmetry, vistas, focal points, geometry, and order. The gardens were further expanded by later generations of Middletons in the 19th and 20th centuries. 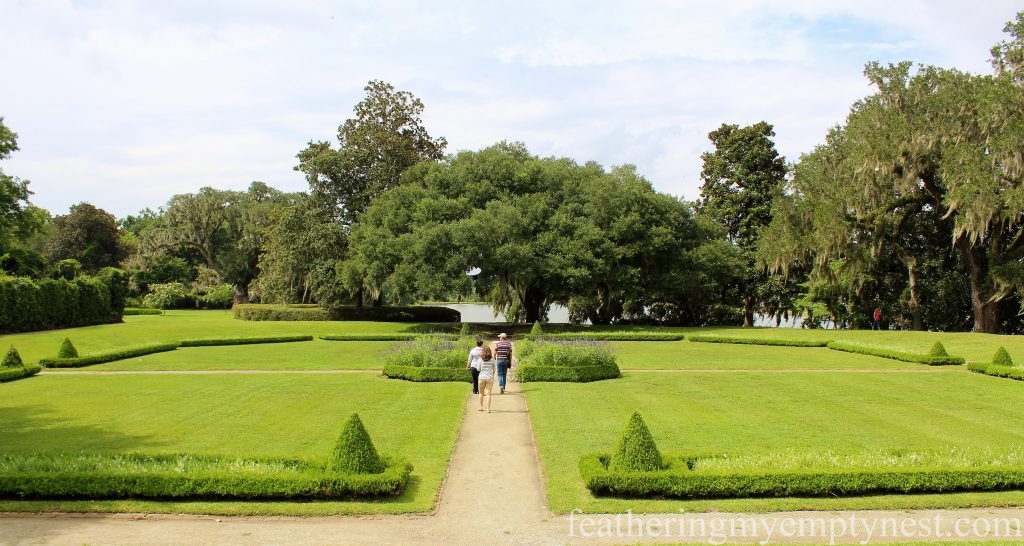 The formal gardens are filled with 100,000 azaleas and 4000 Camellias. We were told that in 1786 French botanist and explorer, André Michaux presented the Middletons with the first Camellias Japonica in America. 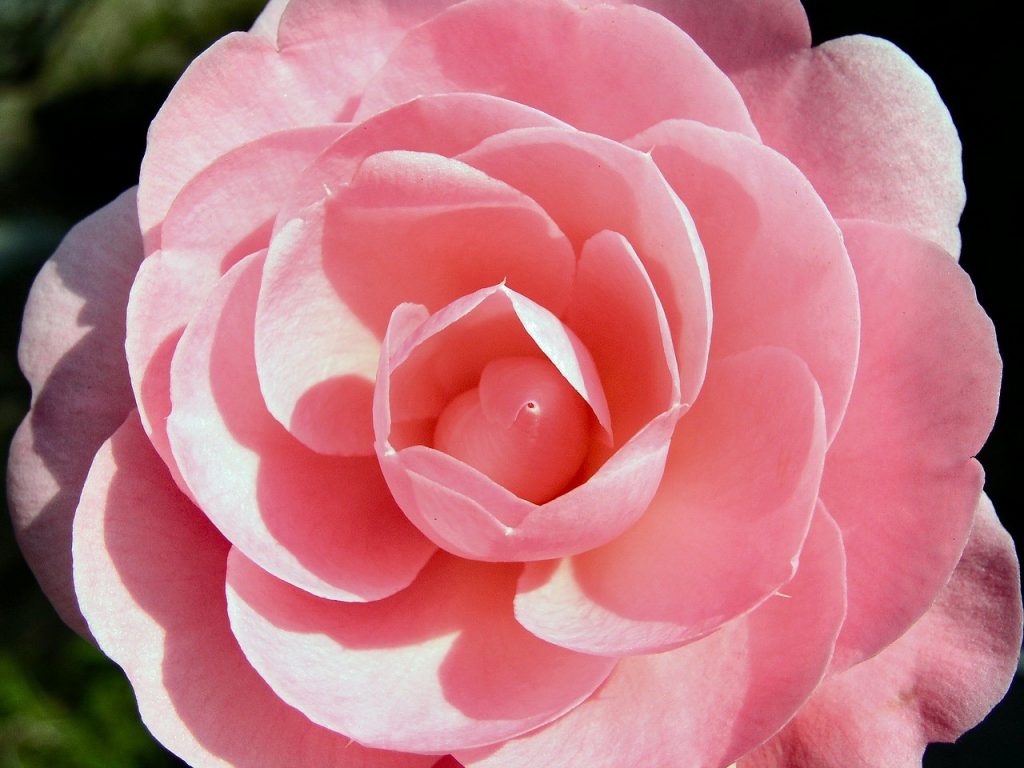 Amazingly, one of those original four Camellias they call La Reine des Fleurs, or The Queen of Flowers is still growing on the property.

We visited Middleton Place in the middle of July when not much was blooming except for the Crepe Myrtles and some annuals. But I imagine if you visited in winter when the Camellias are blooming or April when the Azaleas are in bloom, you would be dazzled by the show.

While we missed the showy Spring blooms, the beauty of the landscape was still more than apparent. I was particularly taken with the vistas of the Ashley River and the ornamental lakes that are framed by legions of majestic Live Oak Trees laden with trailing Spanish Moss. 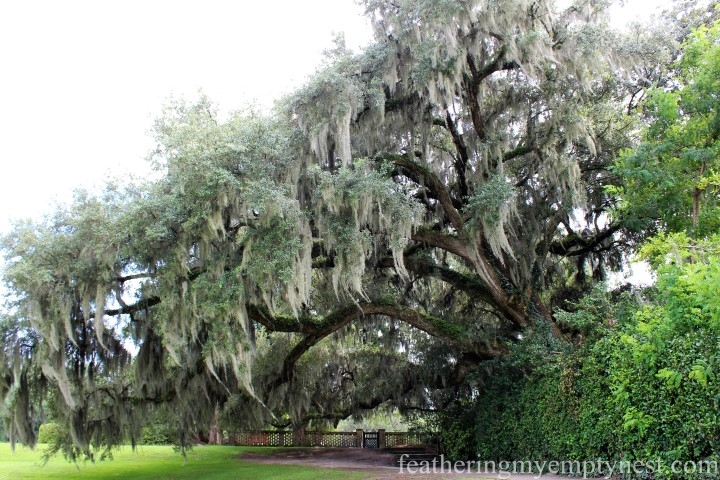 Entering the Middleton Place gardens from the Visitor’s Entry Portal on the northern side of the property, one of the first things you see is the large rectangular reflecting pool. The serene pond features three cascading fountains and is home to several elegant white swans.

As you continue into the garden landscape, you come to a pair of Secret Gardens that are intimate spaces enclosed by greenery. One of these garden rooms is presided over by classical sculptures of The Four Seasons which are positioned in each corner of the square space.

Strolling through the Rose, Sundial, and the sunken Octagonal gardens, you can’t help being impressed by, not only the beauty of the different gardens but by the geometric precision with which these beds were laid out.

The Middleton Oak, a massive 1000-year-old Live Oak tree stands sentry in a corner of the Sundial Garden overlooking the Ashley River. 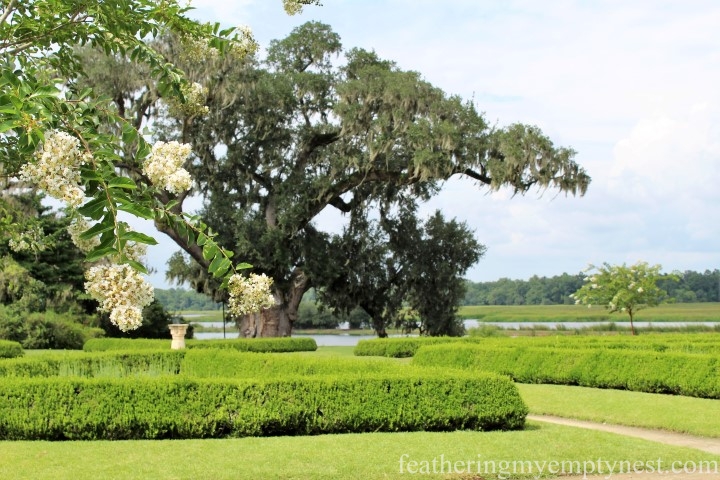 From the formal gardens on the northern side of the property, we followed the path to what was essentially the front yard of Middleton Place. The lawn or parterre is bisected by a pathway which was designed to lead the eye east, straight down from the original entrance of the main house to the vista of the Ashley River beyond. 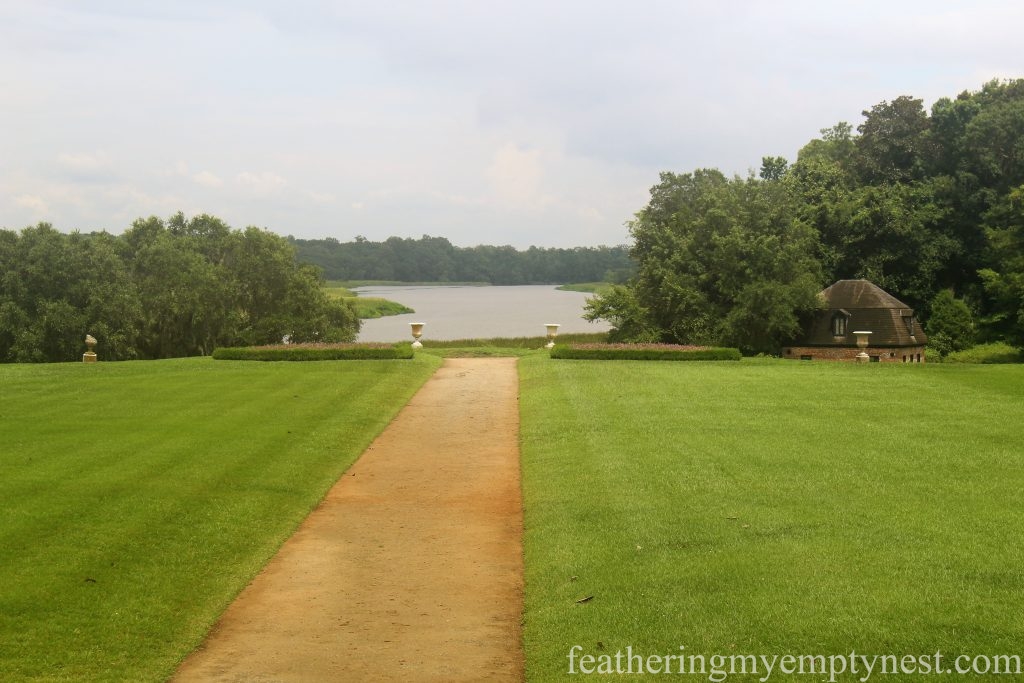 Below the parterre, Middleton created six curving turf terraces that descend to a pair of ponds in the shape of butterfly wings. The grass “body of the butterfly” further continues the visual axis created by the pathway. 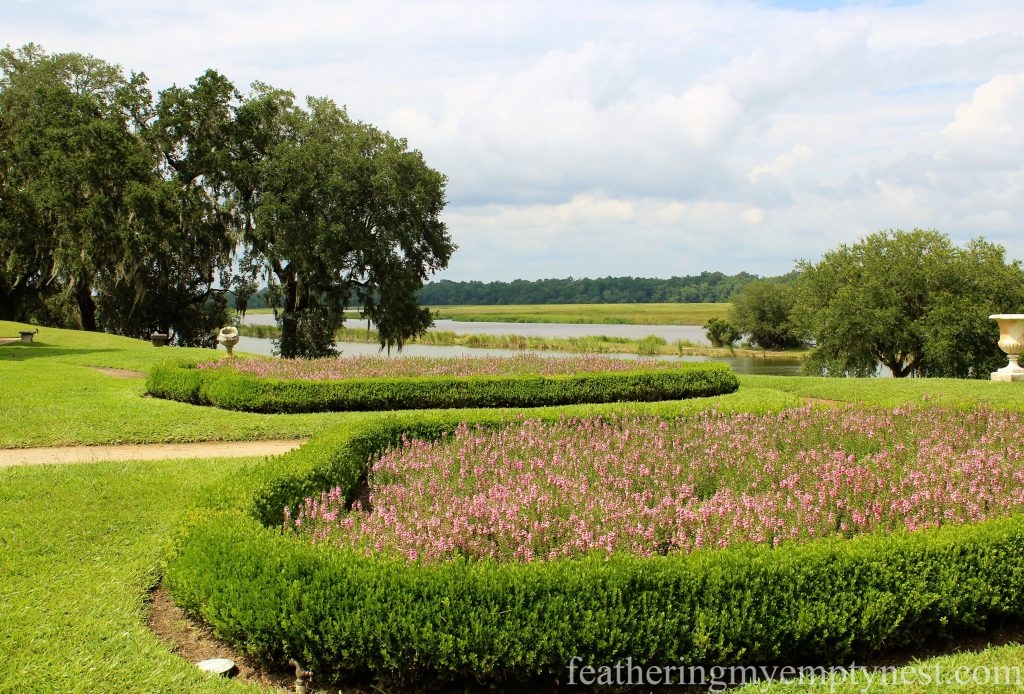 On the southern side of the lawn is the picturesque Mill Pond. The banks of the Mill Pond boast two different small brick structures: the Spring House and the Mill. In addition to providing cold storage for perishables, the second floor of the spring house served as a place of worship for the enslaved people of the Middleton Place plantation. 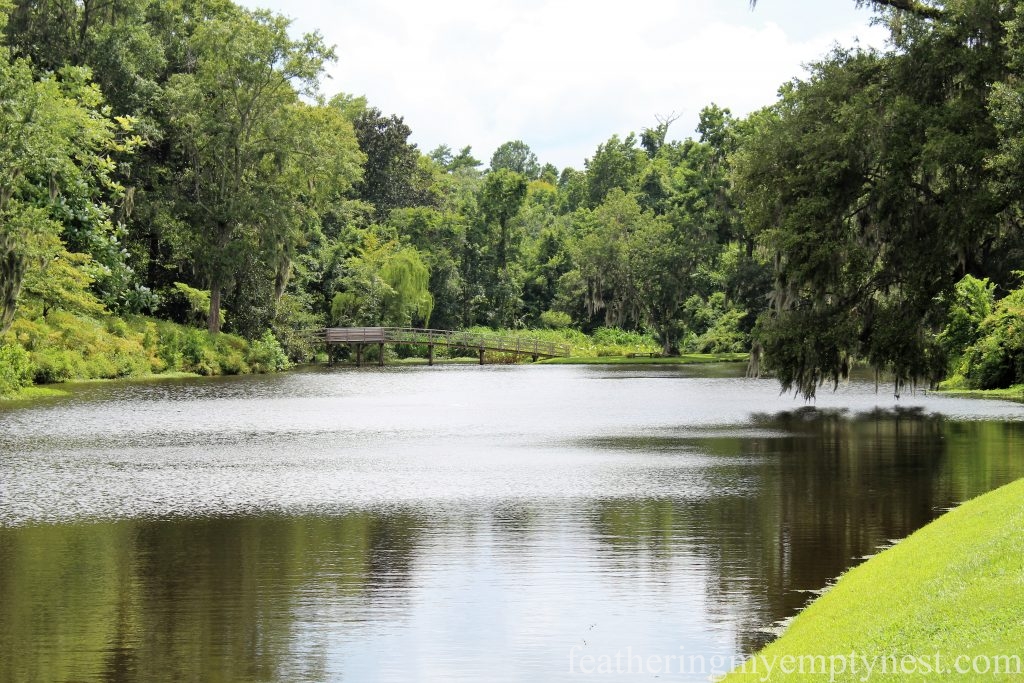 After spending a while gazing at the shimmering water from the vantage point of the charming Mill Pond Bridge, we headed over to the stable yard to view some working plantation exhibits, as well as some of the animals that reside on the property.

One thing I regret is that we didn’t have time for the 60 minute “Beyond The Fields” Tour which explores in depth the lives of the enslaved and freed people who worked on the plantation. However, I did purchase the excellent book of the same name (There is also a video). The book is meticulously researched and includes photos and accounts taken from Middleton family letters and the descendants of slaves. It paints a very vivid picture of the horror and drudgery of slavery, and it also illustrates the unfathomable attitudes of the slave owners.

Adjacent to the stable yard is Eliza’s House which was named for Eliza Leach (1891-1986). Eliza, who was the last person to live in the house which had no running water or electricity, worked at Middleton Place for more than 40 years. The two-family clapboard structure dates back to at least the 1880’s and is known to have once been the home of Ned and Chloe, who were former slaves of Williams Middleton.

After leaving the stableyard and Eliza’s House, we passed by a slave cemetery where they have erected a few antebellum headstones that were excavated on the property.  It was particularly sobering to see these few headstones, as it illustrated the fact that most of the slave burial plots were either unmarked or were perhaps, only marked with wooden markers that quickly deteriorated.

At this point, we followed the path back across the Mill Pond Bridge and up onto the Azalea Hillside which was planted in the 1920’s and ’30’s by Middleton descendant John Julius Pringle Smith and his wife, Heningham Lyons Ellett Smith. The Smiths are credited with restoring the property, which had been seriously neglected since the Civil War. They were also responsible for opening the gardens to the public.

The last thing we viewed before exiting the gardens was the classical marble sculpture of the Wood Nymph. The statue, carved in 1810 by Rudolph Schadow, has become an iconic symbol of Middleton Place. 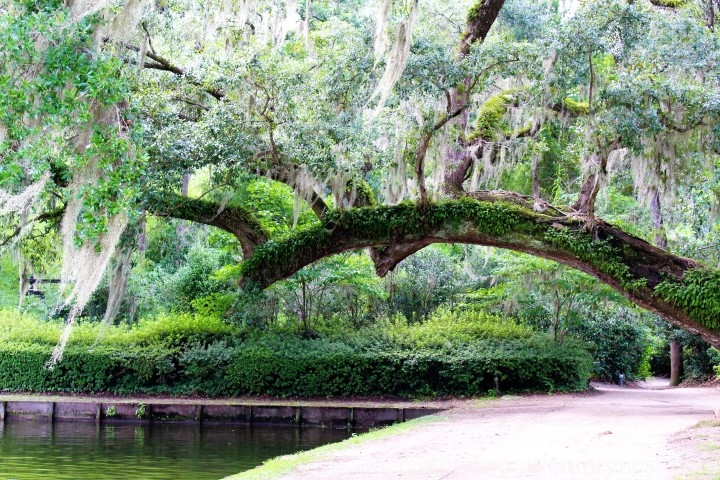 I very much enjoyed our visit to Middleton Place. I have to confess that I always have mixed feelings whenever I tour plantations or the homes of slave owners. However, lately, more and more of these sites have taken on the serious responsibility of interpreting the lives and contributions of the enslaved people as well as those of the plantation owners. While this is indisputably a shameful part of our history, these are stories that I feel are important for all Americans need to hear.

The history aside, the gardens are lovely, and I will make it a point to visit again when the Azaleas or Camellias are in bloom. Maybe I can even convince my husband to stay at The Inn At Middleton Place so that we will be within walking distance to the enchanting gardens of Middleton Place. 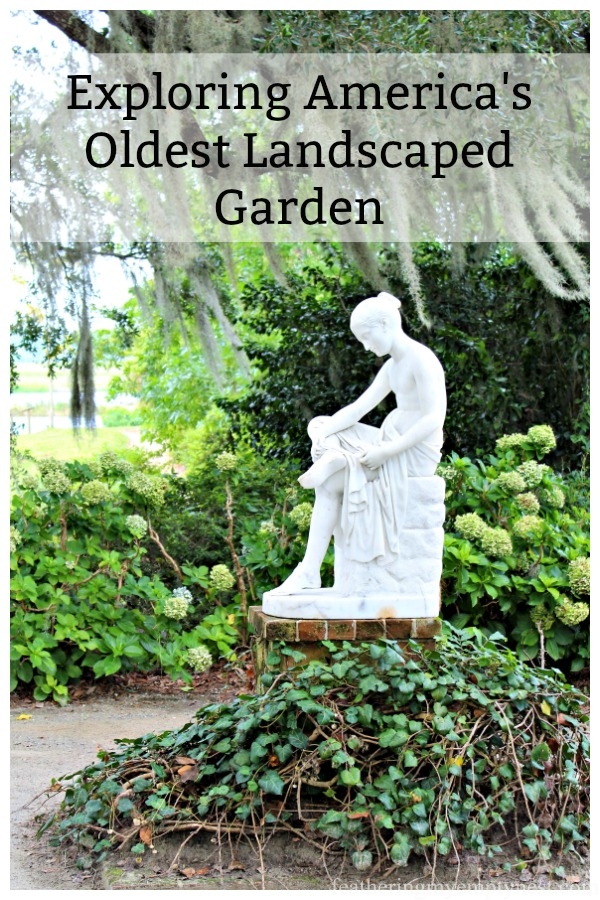