It’s no secret that, when it comes to entertaining, I like myself a theme. It is fairly easy to come up with an idea for a kid’s birthday party. Things like Super Heroes, Disney Princesses, or Harry Potter make great party themes. Women aren’t that difficult to party plan for either. A pretty color-scheme and a profusion of flowers usually do the trick. However, coming up with a themed birthday party for a man is a bit more difficult. There’s sports and. . . I am out.

I have to confess that over the 30-plus years that I have been celebrating my husband’s birthday; his special day has gotten short shrift. This is due, primarily, to the fact that his birthday falls during the second week of January. And frankly, after the hoopla of Christmas and New Year’s, I’d be more enthusiastic about a sharp stick in the eye than about planning another celebration.

This is not to say that I haven’t rallied from time to time to throw him a party. My husband is an avid golfer, so one year my kids and I created our own wacky miniature golf course in the backyard for his birthday. Another year we had a Steelers party. When he turned 40, I threw him an Indian-themed bash, complete with decorations, Chicken Tikka Masala, Beef Vindaloo, and baskets of warm garlic Nan. This was because he had frequently reminisced about the mouth-watering curries his father (who spent time in India with the British Army Corps Of Engineers), used to make for the family when he was a child. And for his 50th, we had a black and silver theme with lots of jokes about being over-the-hill.

This year he turned 55, and I really hadn’t planned to do a party. I bought him tickets to a Broadway show and made a reservation at a nice restaurant for dinner beforehand. However, a few days before the date, my daughter called and asked: “what are we were doing for Dad’s birthday?” And, even though my kids are grown, I felt bad that my plans hadn’t taken them into consideration (guilt is a many “splendored thing”). So, on the spur of the moment, I came up with the idea to throw him a British-themed birthday party.

Over the holidays we were sharing memories about our grandparents with our children. And my husband spoke rapturously about the Cornish pasties that his British grandmother used to make.

This gave me the idea to try to recreate these savory meat pies from scratch. The British menu would also include vegetable pasties (because my daughter is a vegetarian), my easy pear salad (see recipe below), and a trifle for dessert. A traditional English trifle is made with berries. I couldn’t find decent looking berries in the grocery store, and I wasn’t excited about using frozen berries because I feared they’d be too watery, so I chose to make a coconut trifle instead. My husband doesn’t drink but a frosty mug of beer or ale would be perfect with this meal.

With no time to procure Brit-themed party decorations, I had to use what I had around the house. I thought about what single thing would most convey the British theme. I concluded that what we needed was a Union Jack. Sadly, I did not have a British flag stashed away in a cupboard somewhere. What I did have, was several yards of blue fabric and some red and white ribbon –and voilá, I had a Union Jack tablecloth. 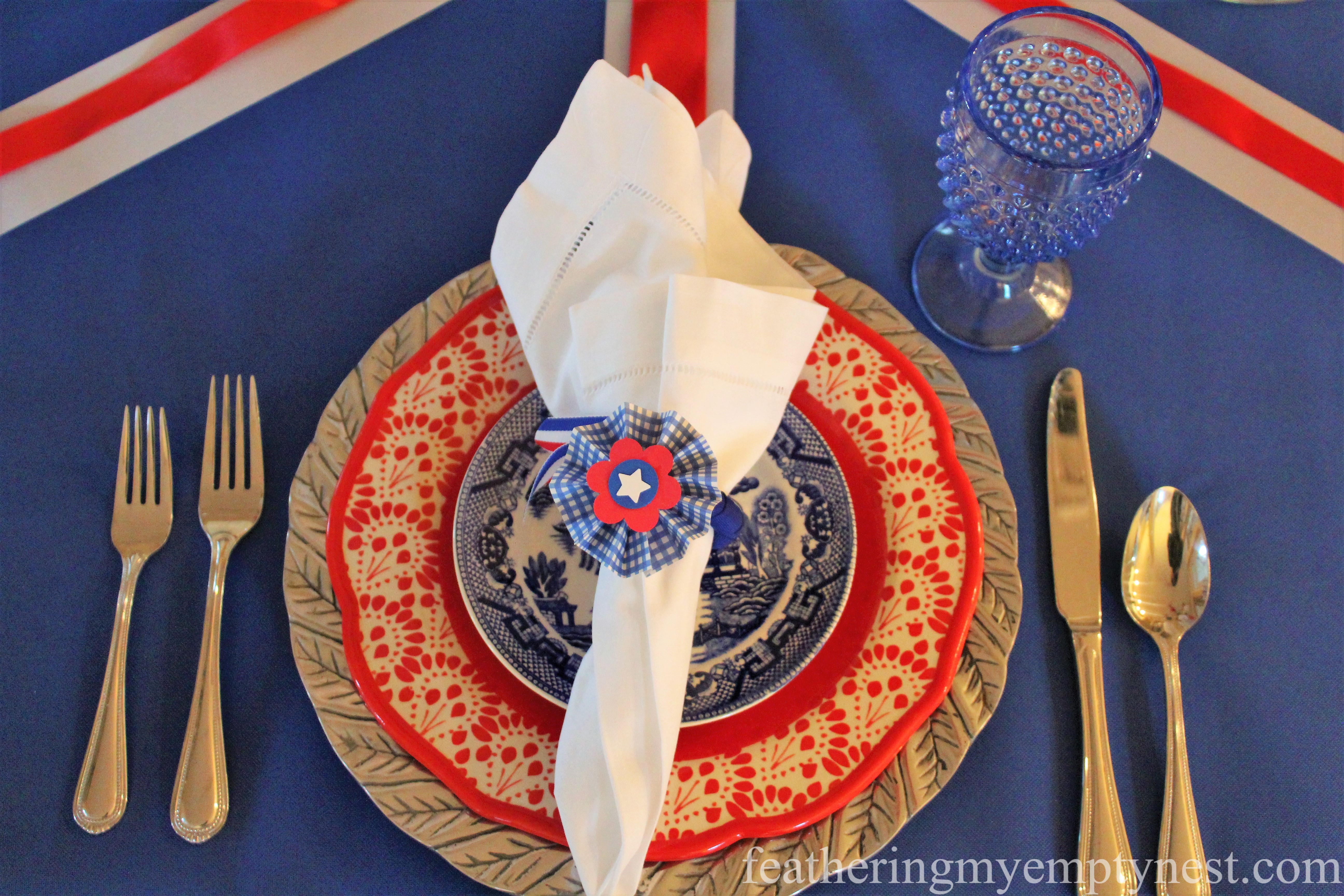 The centerpiece was a simple glass cube filled with red and white tulips from the grocery store. 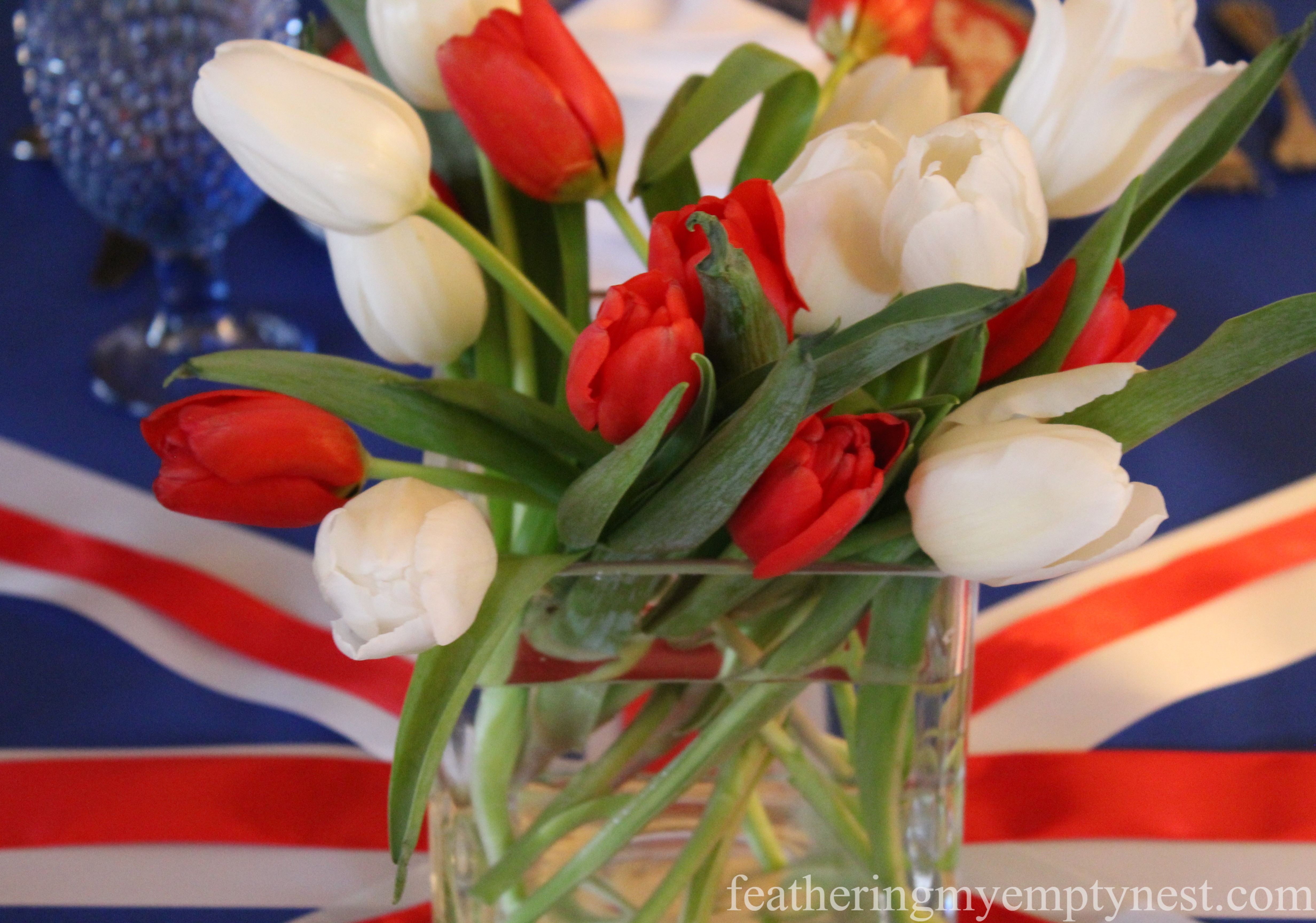 I also had some red, white, and blue tissue paper honeycomb balls which we hung from the chandelier.

My daughter had spent a semester in England, so I asked her to bring over anything British she had that we could use as party decor. Her sweater-wearing English bear and Union Jack piggybank took center stage on the buffet. And I hung a Highclere Castle tea towel, my parents brought me back from a tour of the real Downton Abbey, from the edge of the of the buffet. 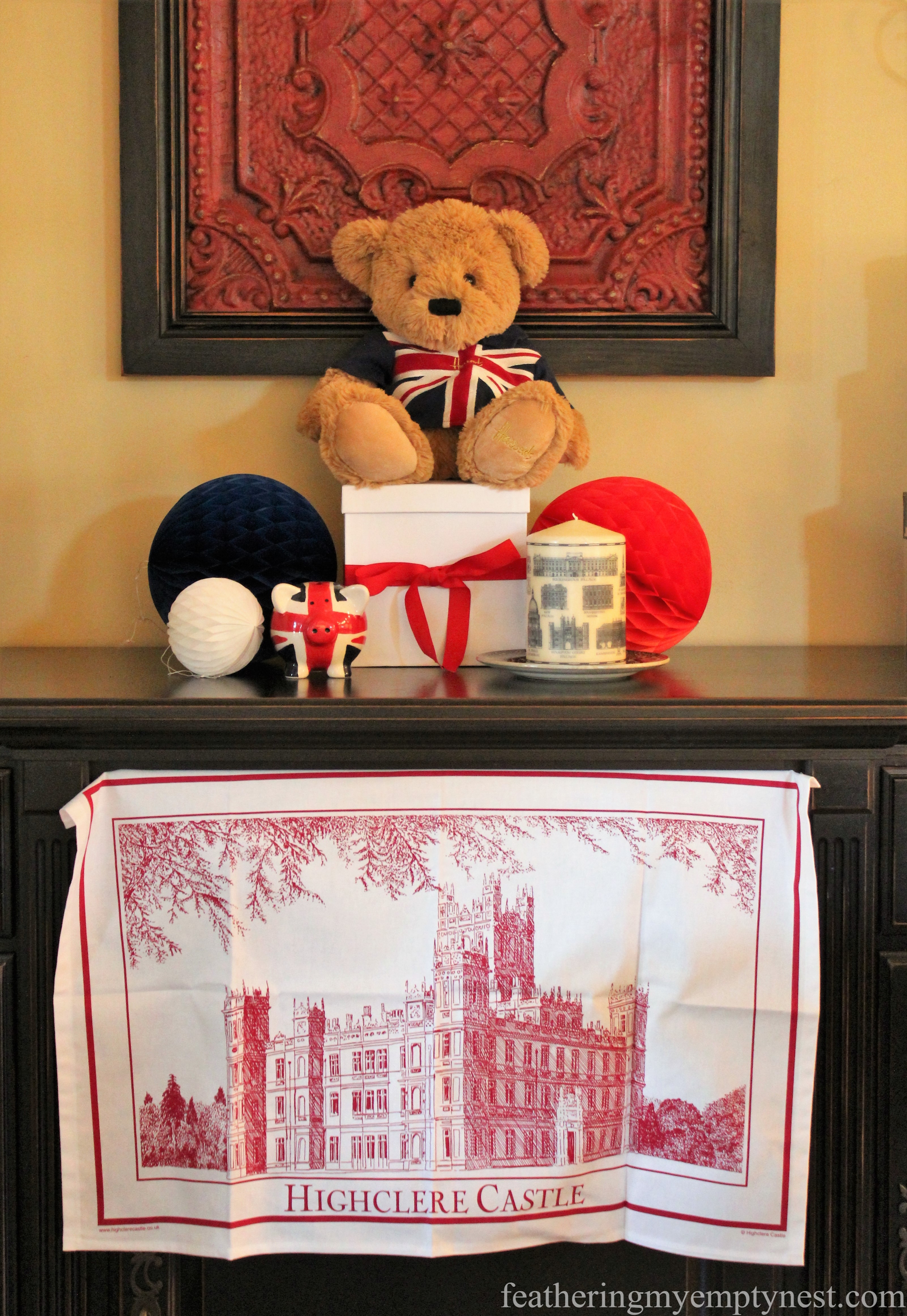 My husband wasn’t expecting anything special, so he was really surprised. And even though my Cornish pasties were not quite as good as his grandmother’s, he really enjoyed them. After dinner, he opened his presents, we watched a British movie, and a grand time was had by all.

There are several things that I took away from this party. The first is that a great birthday party theme can come from anywhere. Second, you can create festive party decorations from things you have lying around your house. And finally, even if you are party-pooped, you can quickly and easily pull together a fun themed birthday party for a man that he will love and that will be well worth the effort. 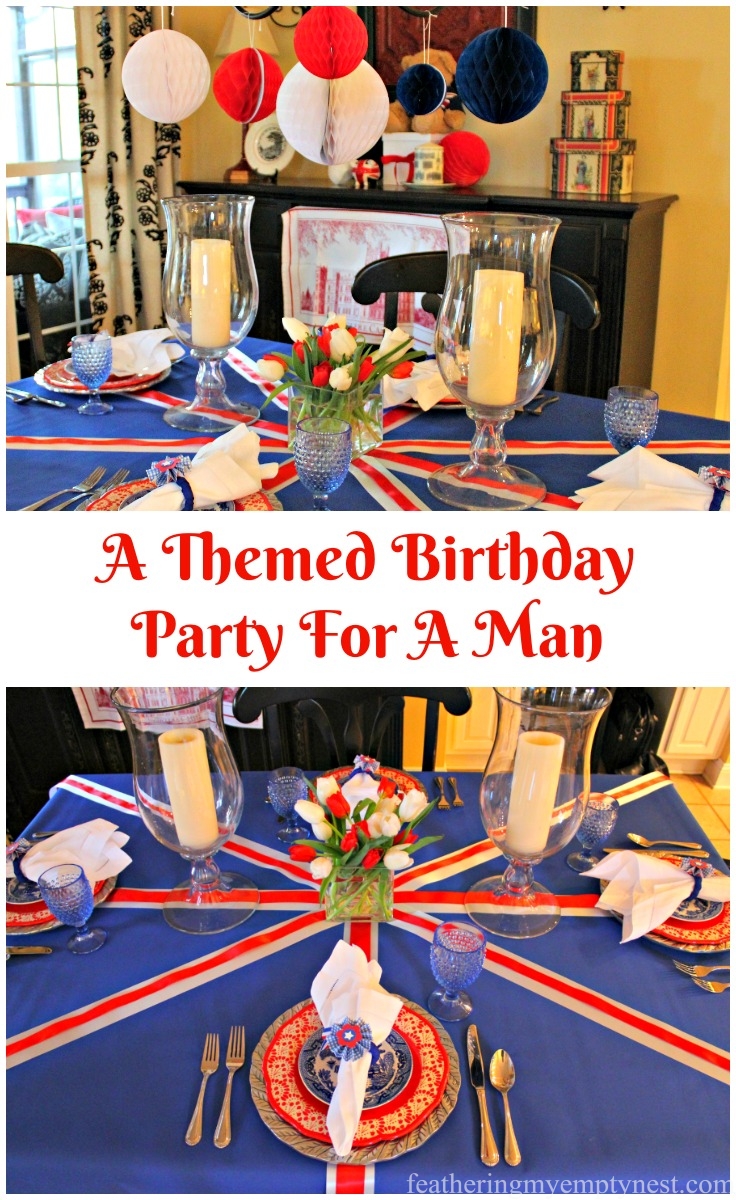 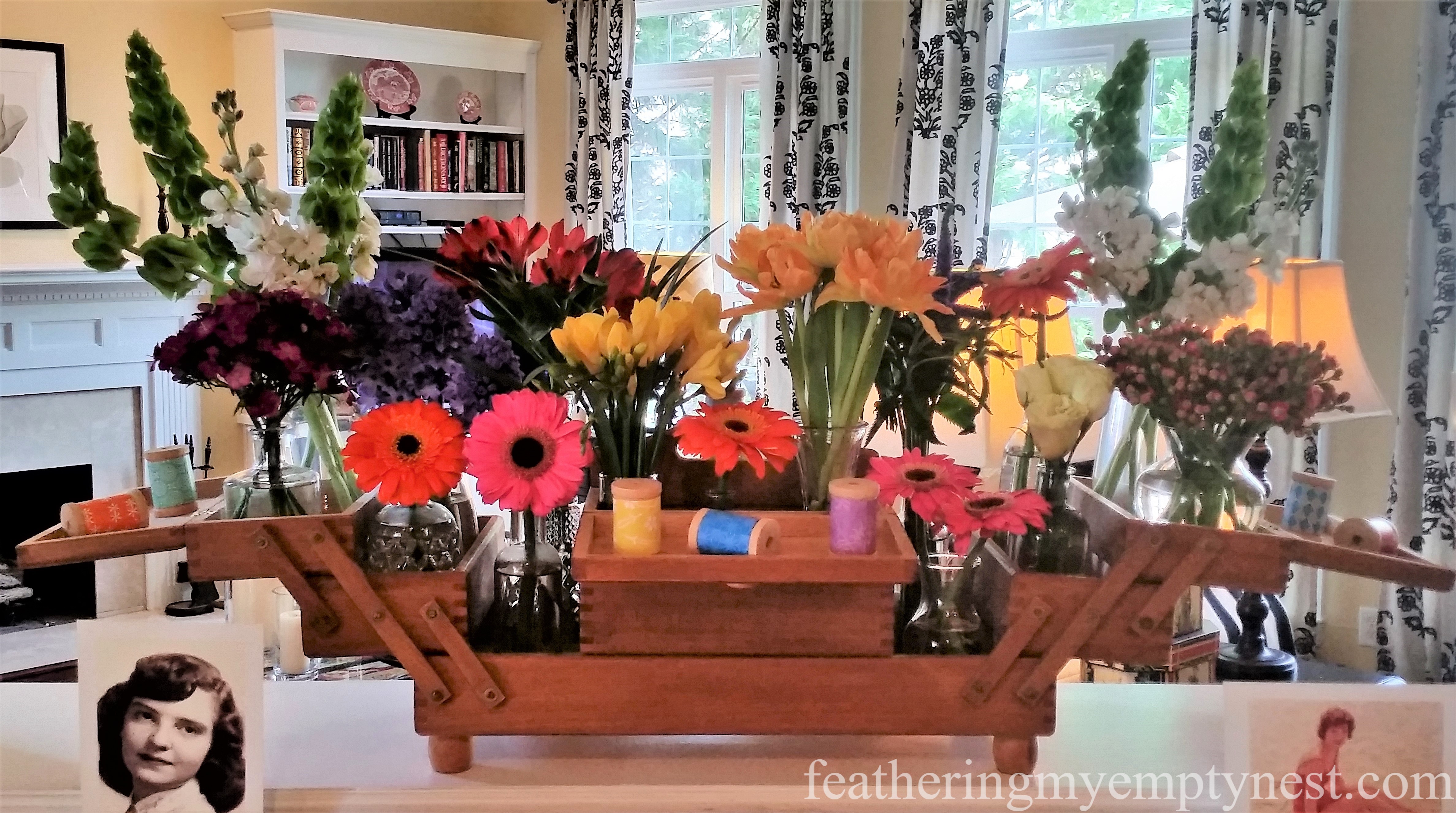 A Succulent Succulents Cake For An 80th Birthday Party

18 thoughts on “A Themed Birthday Party For A Man”